Why I left a thriving startup, and why am I starting one again

These questions (and answers) have been bouncing around my head and my heart for a long time. For the 10’s of people who have asked me these very questions, I dedicate this blog to you.

Around 2009, I left a company I loved filled with really great people for a job with a higher salary. My eldest daughter was about to turn two and at that point in my life, it felt like making more money was the "adult" thing to do. My new job was at a much larger company that had a lot of bureaucratic complexity, and while the role itself wasn’t “bad” I could feel my energy quickly draining.

One day I was driving to work and caught myself thinking, "I really hope I get hit by a car. Then I won't have to go in today." I shocked myself out of that daydream and immediately started looking for my next gig. I applied, interviewed, and was hired at BigMachines within three weeks.

For the next two years, BigMachines was everything I wanted in a company. The people there were passionate, I felt like I could work hard and be noticed, and no one sweated the little things. By far the best part of working at BigMachines was that it introduced me to some of the greatest people I had ever met. People I knew I wanted to work with for a long time. Thankfully, they felt the same way about me and in 2012 I co-founded the company that would become g2.com with Godard Abel, Matt Gorniak, Tim Handorf, and Mike Wheeler.

When we started G2, we had no idea what we wanted to build, but we knew we wanted to build something great together. We bounced a lot of ideas back and forth, but eventually landed on bringing real reviews to the software space. The idea that you could find reviews on hotel rooms or a $500 television, but not on million dollar enterprise software proved to us software was in need of a disruption, and we were happy to oblige.

I loved working at G2. More days than not, I couldn’t wait to go to work. I’ve always loved solving difficult problems, and building G2 provided me with a lifetime supply of them. My coworkers quickly became family and it was a gift to succeed and fail with them every day. I felt seen, valued, important, and loved. Many days, it felt like we might not be able to make G2 a successful company, while other days it felt like we couldn’t lose. I believed anything was possible with this group of people.

There were hard parts. Lots of them. Working at a high growth startup stretched me in ways I never expected. During the many stages of G2's growth, I was a Co-Founder, solo Designer, Front-end Developer, Head of Product, and Chief Design Officer. I managed teams of one to over 30 people. I had to learn to quickly switch gears and adapt to the ever changing environment that was G2's forever-state.

Every time the company doubled in size it had to re-invent itself. All of the amazing skills we had worked so tirelessly to build in order to get to that point would suddenly no longer help getting us to the next. In the very early stages of G2 when we needed to figure things out, I would put my head down and work harder, often pushing myself to solve problems alone or with the handful of developers that I trusted to work quickly. This worked fantastically, until it didn't. I had to learn to bring in others, get stakeholder buy-in, communicate with customers, and "plan ahead". We couldn’t just bulldoze our way through whatever features seemed most compelling.

I'd like to say I recognized the change in what was required of me immediately but, as always, these lessons are hard won. I continued to use the skillset that got me to this point so successfully and thought that I just needed to do more of the same. I worked harder, not smarter, which brought me close to burning out multiple times.

As more and more people were hired into leadership roles, I felt my voice being lost. Things would start to get pushed that I strongly disagreed with and I no longer felt empowered to effectively change them. I stopped being part of the senior leadership meetings and was scrambling to find my place. Rather than bringing creativity to meetings, I covered my hurt by trying to be the smartest guy in the room and explaining why the ideas being presented would not work. While I don't think my judgments were always wrong, the way that I went about presenting them was unsuccessful. Finally, a trusted colleague shared with me, "You are being perceived as a no guy. It doesn't matter if you're correct or not. The perception is that you just say no to everything." I appreciate this colleague being candid with me and I think eventually I was able to improve and overcome.

Eventually they brought in someone that I trusted and loved to run the product team above me. I would now report to them. Because of this person’s amazing work, personality, and ability to manage, I swallowed my pride and kept on.

As I reflect on my time at G2, there are some things I wish I had personally done differently. I like to believe that I could have run a product or design team at a 1000+ person company, but the question I have come to is: would I have even liked it? Would I have been happy? Or would I have found myself back in that traffic jam waiting to be hit? I think the latter.

Leaving G2 was one of the hardest decisions I've ever made, but I think I started planning my exit the first time I was no longer on the senior leadership team. The idea of working somewhere and not having a seat at the table was just not compelling to me.
So, with a heavy heart, I told my team I was leaving. One week later the entire world shut down due to COVID.

What to do next

At first I didn’t do much. It was COVID and I was newly “retired”. I worked on a children’s book that’d been bouncing around in my head for years. I began developing a couple different apps from time management to a communication platform. Then when we saw that COVID was going to last longer than we initially thought, my wife and I pulled our kids out of school, bought a motorhome, and toured America’s national parks.

After this year of travel, I started doing contract work for a number of startups as I was missing both designing as well as interacting with people.  It was good to be designing again and solving problems that I was good at solving.  I wasn't looking to join another startup, but the opportunity ended up being too good to pass up.

I had been discussing carriersource.io with Rob Light, the CEO and founder since before he started the company. We shared countless meals discussing strategy, as well as the highs and lows he could expect as he began this journey. It consistently sounded like a great idea, but I always thought of it as “Rob’s startup”.

One day Hamed Asghari, lead architect at G2 (and my close friend), called and asked me if he should apply for the open Chief Technical Officer role at CarrierSource. I spoke with Hamed for probably half an hour explaining why I knew this would be an amazing opportunity for him. “It will be fun!” “It has HUGE potential!” “It's going to go so fast.” “The tech problems are familiar, but you get to start from scratch.” “This industry needs help and you could be the one to help it.” By the time I got off the phone with Hamed, I had convinced myself that I should work for CarrierSource.

Working at G2.com for so long, we learned the value of user generated content.  We saw firsthand the innate power that authentic reviews had to change the perception of a company.  We discovered just how disruptive it could be for businesses to embrace the voice of their customers. This is exactly what Rob and CarrierSource had been trying to bring to the logistics space.  I never thought I'd be working in logistics, but the vision of driving trust in any space is one I completely understand and am fiercely proud to be a part of.

I love working at startups. Pushing as hard as you can as a team and solving hard problems with a passionate group of people. This is my happy place. What I know I was built to do. It's going to be a wild ride and I'm so happy I'm along for the journey. 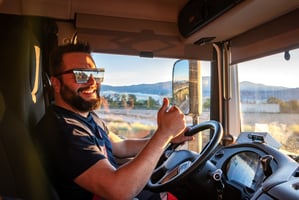 Once you’ve claimed your carrier listing, you can quickly start attracting new customers by filling...

An interview with a broker

We sat down with Ross Miller, a Carrier Sales Sourcing Specialist at a major brokerage, to...

Reading online reviews before a purchase is now second nature, but one of America’s largest and...